Impossiball on a spinning ball.

The curvature math given to us is debunked easily.

Snipers do NOT account for curvature or Coriolis affect. Try and find the adjustment in the Marine Corps Sniper manual. It's not there for a reason.

It's just windage and elevation. Windage is for the round to travel against the wind direction. Elevation is when you raise the rear sight and the rifle upward so that a round travels further down range. 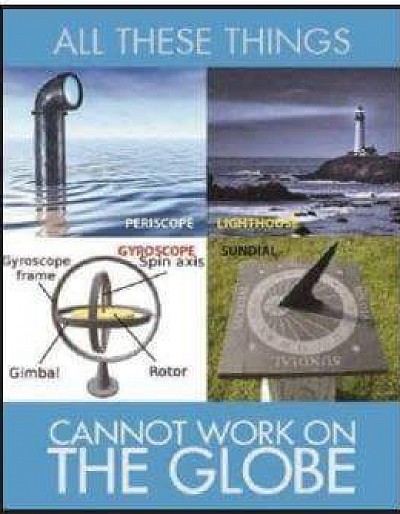 Things that don't work on a ball.

Parascopes can see for miles.

You can see further with a telescope at eye level then the globe model would allowed.

I HIGHLY recommend the book "200 proofs the earth is not a spinning ball" by Eric Dubay or watch the 200 proofs video on page 1 of this site.

It also has a list of lighthouses that can be seen further then the curvature would allowed and many other treasures. 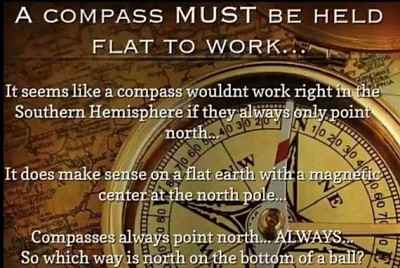 Compass  always points north. Compass only works on a flat earth. Think about it. How would it point north at the south pole. Through a ball? 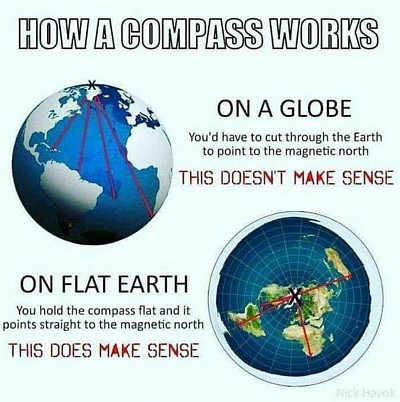 So-called “satellite” phones have been found to have reception problems in countries like Kazakhstan with very few cell phone towers. If the Earth were a ball with 20,000+ satellites surrounding, such blackouts should not regularly occur in any rural countryside areas. 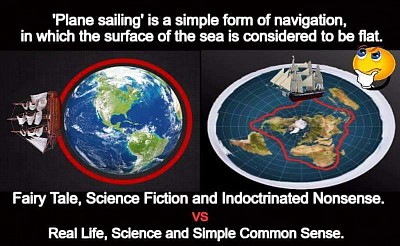 And you can sail all over the world using dependable star positions. So much for that wobbling and flying in three different directions. 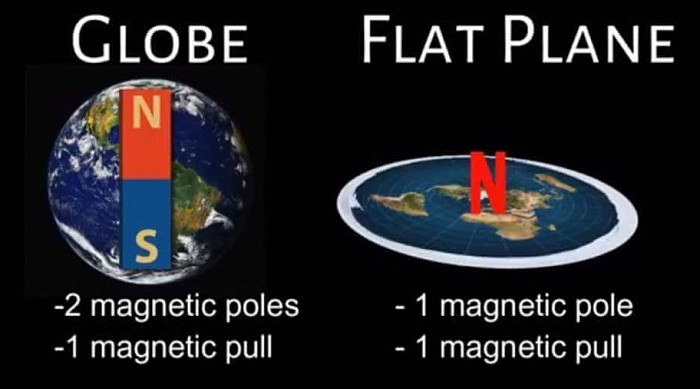 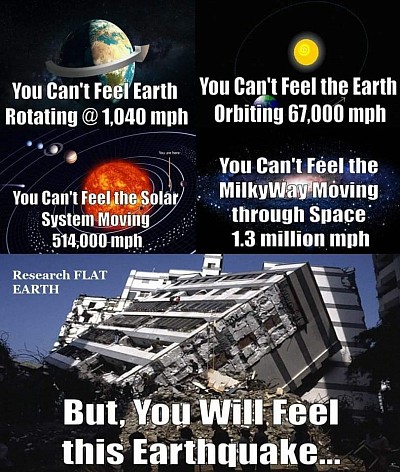 Is the earth and all it's stock really moving?

How can we not feel anything if we're spinning, wobbling and flying in three different directions? You see the sun moving across the sky throughout the day yet you feel no movement. Why assume its this massive earth and oceans with all it's stock that's moving instead of the light in the sky? Which is more logical and sensible?

Gas weights less then mass. How can the atmosphere rotate at the same speed as the mass of earth? 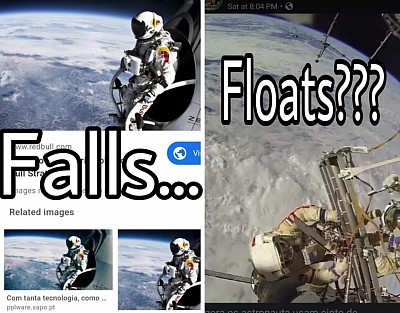 The globe spins on theory the flat earth rest on facts.

The lighter gases with less density then air rises above air so air pressure is of course thinner the higher you go. The more density air hangs at the bottom. Like propane. To prove this go climb a mountain and see how hard it is to breathe.

Seems likes it's density instead of gravity and in an enclosed environment. 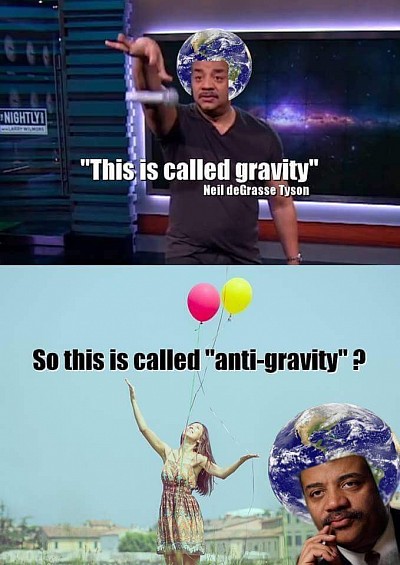 Some say being on a train and the atmosphere not moving on the train is the same thing as earth. But its two different situations. The train is in a enclosed environment where the world is said to be open. A train has centrifugal force but earth has none. Because one is moving and one is not.

We're not moving and we're enclosed. 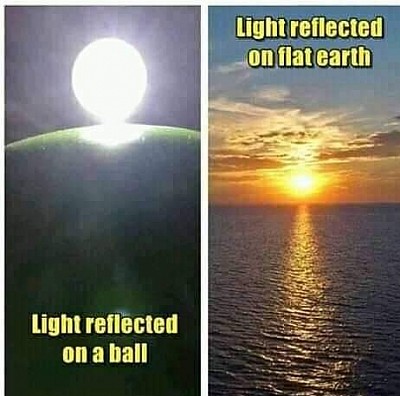 Eric Dubay made so many good points. Here's yet another one: It would be impossible for fish and other creatures to swim through such forcefully held water.

It is quite easy to disprove “Gravity” as being the force that keeps us stuck to the earth, for the simple fact that air can be lifted by mechanically creating empty space. 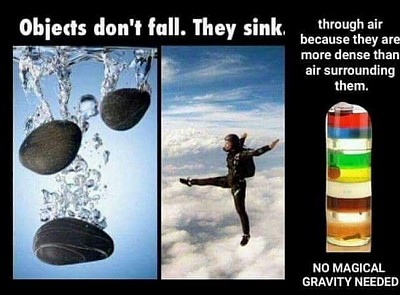 Gravity. Are things being pulled? Exactly how? What tackle?

Gravity is nothing more than density and buoyancy reacting to its medium (air/water/helium) in an electromagnetic environment.

No gravity = no globe. 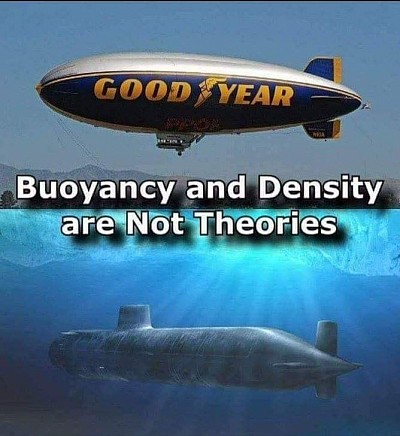 You can prove things fall down but you can't prove the things that gravity consists of: a spinning wobbling flying ball that has things spinning around it while other things are stuck to it.

Out of all of that the only thing you can prove is that things fall. You assume the rest based on what you've been told. Not seen or experienced. This is why Neil Tyson drops the microphone and walks off. Because he had nothing else.

Pull a helium balloon downward and it will come down. Stop pulling it and it will rise to it's density level. It was never pulled to begin with. 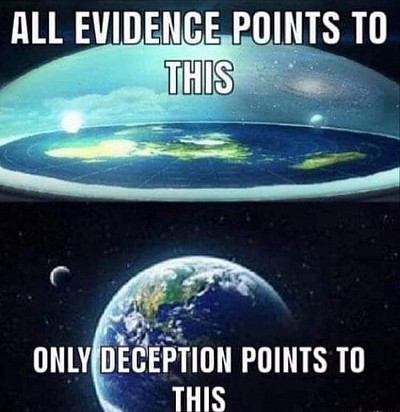 Why do they care what we believe? No one's flipping out over hollow earthers. Because there's no observable evidence for that. Anyone on a plane can see it's flat.

WHY would the goverment and the media act this way over a supposed theory? They usually don't.

Why if it's not true?

Alright let's talk about satellites now. You think you seeing them do you? Let's turn this corner of the rabbit hole and see what facts show us.